Forged in the Fire

I am afraid of fire. So much so, in fact, that I don’t have a “mesmerized” or “intrigued” attitude about or by it. I will sit by one when I am cold, but otherwise the physical manifestation of fire holds no luster for me. Part of this is that I am a native Californian, and though we have enviable weather in my state, we are plagued by the fear of fire, especially during this season. The last devastating fire in my home town was August 2021; while we were not evacuated, so many of our circle was. Some lost their homes and whatever they could not take with them.

I had trouble figuring out where this fear originated; for years, I have passed it off as a quirk, an odd fixation, an excuse to avoid at all costs. Really, it all comes back to four catalysts: my parents, the movie Backdraft, Universal Studios, and my grandmother.

Backdraft came out in 1991; I was 5 years old. In 1992, the Backdraft exhibit opened at Universal Studios. My parents, who appreciated the movie and were eager to spend the day at Universal Studios with my little brother and I, took us into the exhibit. I honestly don’t think they even gave it a second thought; it felt innocuous to them. Interesting, exciting, immersive. Truly…immersive. Let me explain:

We enter the room onto a secure scaffold. The room is cool, dark. There are people standing around us and there is no clear and present danger. At the tender ages of 6 and 4 (my brother), I recall feeling safe and perhaps even a little bored. And then, a sound. A surge of heat. Silence as people start feeling into the sudden shift of sensation. And then, 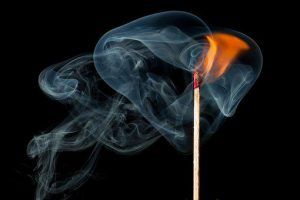 Whoosh. The entire room erupts into flames. The scaffold shakes, people cry out. Me? I remember screaming. Crying. Fear.

I am pretty sure my parents were beyond horrified, and probably a tad humiliated as the other participants surely looked at them with some shady side eye for bringing two now-screaming, hysterical children into what probably should have been labeled with an age minimum. Hey, it was 1992… age-appropriate labeling was barely a thing then. The fact that I have this memory so many decades later speaks to the fact it was a significant event, dare I say even a trauma?

My practical, loving, and sometimes overly-prepared grandmother also plays a role in this. We frequently stayed with her and, for a while, lived with her while our parents built their house. Nama wanted to make sure that, in the event of a fire, we were able to get out of the house alive and, if necessary, save them. As the eldest, I was tasked with making sure we were all accounted for. Our drills involved ripping the sheets off our bed, tossing out pillows, blankets, and such to soften our landing from the second story floor. We had a folding chain ladder and practiced fixing it to the bars on the windows so we only had a six-foot drop at the end. From there, we would run around the house, grab a rock, and throw it (not during the drill) through our grandparents’ window. While I can appreciate the careful planning and thoughtfulness as an adult, it was something I dreaded as a child.

Decades later, I have a healthy fear of fire. Some days it is hard for me to leave the house. I always check the stove, the wall units, the coffee makers, the oven. Even when they haven’t been turned on. I check several times to make sure the lights are all off. As I drive away, I second guess myself. On really bad days, I obsess over the possibility of a fire and count the minutes until I can get home, sometimes feeling a sense of relief when I see my house is still standing. A lot of effort goes into managing this fear and breathing through it. I doubt I will ever leave my house not feeling worried. I doubt that I will ever not check all the things several times before I leave.

Yet there is this inner fire. I sometimes forget that we are forged in fire. Fire, in its nature, is transformative. It ignites, burns, heals. There’s always a spark, an ember that is sizzling within us. It warms and inspires us. It reminds us that we are alive and burn with passion, potential, and power. Sometimes life tamps down the fire a little bit. It could be a deluge of grief or a smothering stress. Either way, this inherent, ever-present fire is not always a consuming conflagration.

But when it is…

Isn’t that where the magic happens? When that fire burns–and I mean really burns–we are thrumming through those flames. We are ignited and figuratively (though sometimes it feels like we could be literally) burning with intensity, passion, enthusiam, possibility, creativity, candor, power…and more. The fire, in my experience, refines our experience and capacity in such a beautiful, majestic way.

When we embrace this fire, we exude a radiant, prismatic beauty that sparkles with authenticity, truth, and joy. We sparkle, reflect, and beautify the space of us and the space around us. Just like with diamonds, fire is one of the biggest contributers to our beauty. We just have to embrace it.